Watermill, NY July 24, 2010. "Paradiso," Robert Wilson's annual event and art extravaganza raised close to $1.4 million for the Center's year-round artist residency and education programs. The auction was led by none other that Simon de Pury.

Guests were greeted by a snow monkey, amazed by dancers suspended by trees in pods, walked through a 30 foot fun house, a human tornado machine and captivated by the smell of scents that filled the air. This evening, Robert Wilson introduced WM, Paradiso Watermill Scent by Loc Dong. Wilson is always on the cutting edge of new art forms, having introduced VOOM (video photography) in 2004, forming Byrd Hoffman center for movement and theatre based art and many other achievements. His exploration of scentology as an art form is quite intriguing. A beautiful aroma filled the air leading down the path to the event. We were encouraged to use all of our senses. I learned that WM, Watermill Paradiso Scent was designed exclusively for Watermill by International Flavors and Fragrances sr designer Loc Dong.

There were about 600 guests dining under the large white dinner tent. Guests danced the night away after hours to DJ "A Touch of Class." 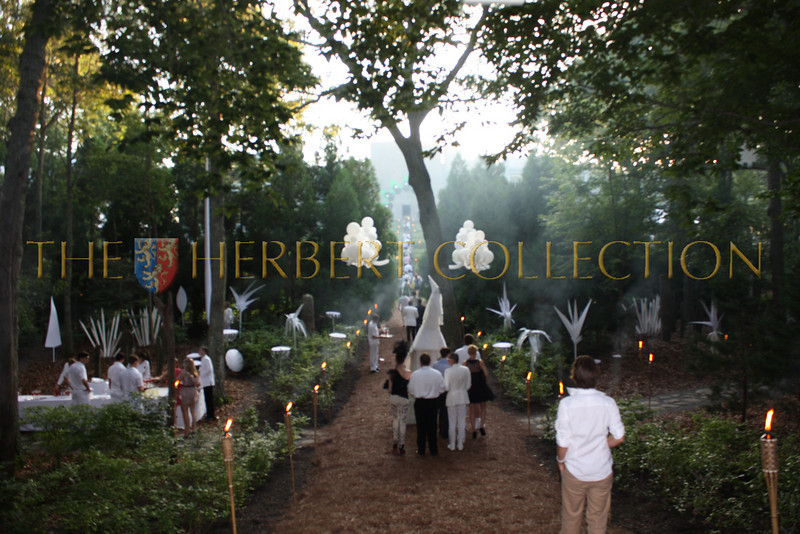 The entrance to "Paradiso," The Byrd Hoffman Watermill Foundation